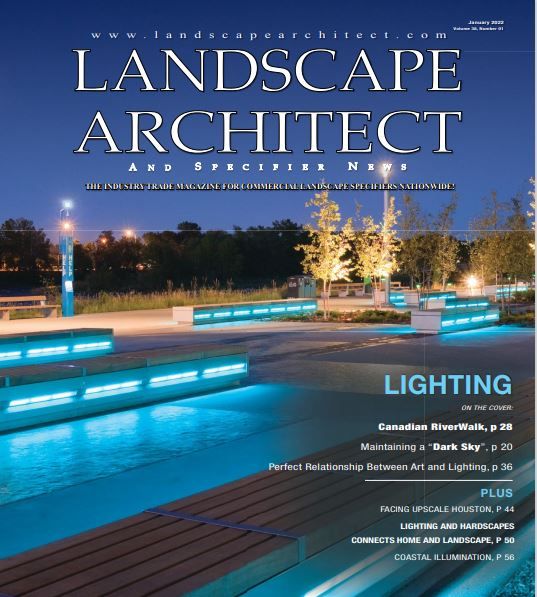 In 2019, as demand for high-end facilities in the Galleria area of Houston, Texas caused upward expansion, Stirling Electric and Irrigation was tasked with illuminating an entrance for the 14,000 square-foot Cosmopolitan Condominiums that would make the residents proud.

Located a half-mile from the bustling Houston Galleria area, this ultracontemporary, 80-unit, residential building’s hardscape and lighting layout was designed to complement and unify award-winning developer Randall Davis’ building design. The Cosmopolitan Condominiums feature resort-style amenities including a state-of-theart fitness center, movie theater, wine room, a seventh-floor infinity pool terrace that features South Beach-inspired cabanas, and spectacular views of Houston. McDugald Steele designed the north entry façade and highly exposed east façade that runs alongside Post Oak Blvd, one of the city’s most trafficked thoroughfares. As nighttime appeal was a primary focus, Stirling was called to implement a lighting plan that would best complement the north-facing entrance and eastern monument sign. Stirling’s Director, Bryan Daniel, led the lighting design, from concept, through construction completion working with the landscape architect to develop a cohesive plan that would fit the character of the design and meet property management’s request for one centralized lighting controller.

“We designed the system in such a way that two separate conduits were installed to connect all fixtures and run the system seamlessly.” Daniel relayed, “Stirling strategically ran separate conduits from each fixture to the centralized power source and centralized controller in the building. The system’s design provides the client flexibility to have different color scene zonal controls when desired. “ Stirling’s design called for attention- grabbing lighting, so the team added an auto-switching, multi-voltage power supply, with a touch-sensitive menu to customize the illumination of the building’s façade, mature Sweetgum trees, and the aluminum monument sign on the eastern lawn area. The front entry was designed to be predominantly a hardscape area because of the space restrictions set by the city-owned sidewalk. There, the architect designed two large porcelain pedestals to flank the main entrance. Each pedestal features a sculpture, made from 100 percent recycled Polyethylene resin with a lacquered finish and is then backed by square aluminum taper planters with boxwood globes. The pedestals were designed to appear as though they are floating over the pavement with smooth moonstone nestled underneath. They also include a strip of tape light to accentuate the sense of the floating face at night. “The team quickly realized there needed to be more linear illumination along the sculptures for the whole concept to truly stand out and be eye-catching from the street,” Daniel explained, “We were already utilizing lighting flex tape on the underside of the pedestal to illuminate the moonstone, so it only made sense to create a custom lighting element for the sculpture utilizing the same product.” The design team refined the plan in order to create a custom “V”-shaped lighting element. A 1.5” channel was then carved into the porcelain pedestal and an acrylic strip cover was added to the lighting element to match the overall design style. The front entrance façade was completed with two linear wall sconces.